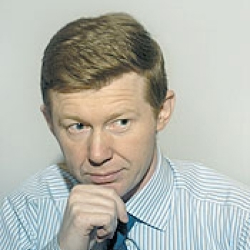 Mikhail joined the team of the Institute in October 2013.

He coordinates and heads research and consulting projects in the field of analysis and forecasting development of financial markets, budgetary and monetary policy in Russia.

In 1983 he graduated from the Faculty of International Economic Relations of the Moscow Financial Institute (currently - the Financial University under the Government of the Russian Federation), then finished post-graduate school of the Institute of World Economy and International Relations of the USSR Academy of Sciences. Mikhail got his Ph.D on international monetary and financial problems in 1987, and in 1998 he defended his doctoral dissertation on the topic "The influence of the currency factor on international trade" at the Institute of Europe of the Russian Academy of Sciences.

For many years he worked in large international and Russian financial companies and banks, headed the consulting department of the international auditing company Deloitte & Touche, as well as was the senior vice-president of Rosbank.

Mikhail participated in the work of official delegations within the framework of the G8 meetings, working groups of the Presidium of the State Council of the Russian Federation on the problems of state industrial policy (2003), development of the banking sector (2006), increasing the investment attractiveness of the Russian regions (2010).

He is the author of over 100 publications and four monographs on foreign exchange, banking and monetary problems.

Director of the Center for Monetary Policy and Financial Markets of the Financial University under the Government of the Russian Federation.

Member of the Interregional Banking Council under the Federation Council of the Federal Assembly of the Russian Federation.

Member of the RSPP Banking Commission.