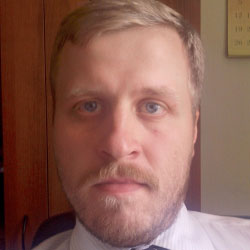 Deputy Principal Director on Energy Studies, Director of the Center for Energy strategic analysis and forecasting

Mr Belogoryev is an expert in economy and history of the Russian and Global Energy markets with special focus on the Russian Energy strategy and integration and structural reforming of national and regional Gas markets.

He is one of the main authors of the Concept of the EAEU common gas market formation and the draft Master plan of Russia’s Oil Industry development for the period up to 2035, and also since 2006 a constant participant of the Russian Energy Strategy development.

He graduated from the Faculty of History of Lomonosov Moscow State University in 2005. In 2006–2009 worked as an analyst and afterward a head of Gas Research Department in the Institute of Natural Monopolies Research (Moscow). In 2010–2015 worked in the Institute of Energy Strategy (Moscow) at first as head of Fuel and Energy Complex Department, next as scientific secretary and from April 2013 as Deputy General Director.

Mr Belogoryev is a member of the Committee on Energy Policy and Energy Efficiency of the Russian Union of Industrialists and Entrepreneurs (RSPP) and an expert of the Russian Gas Society since 2007.

His main interests are: Russian Energy strategy and policy, Global Energy transition and adapting oil and gas companies to  economy, Energy relations, integration and globalization of the gas markets, the development of the EAEU common Gas market, structural reform of the Russian Oil and Gas markets, and geopolitical factors of the Global Energy development.