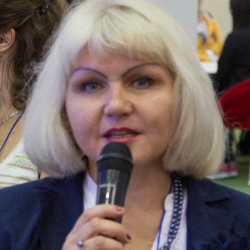 Head of the Public Events Department

In 2000 she completed postgraduate studies in the Russian Academy of Sciences (RAS) and became Ph. D. in the field of radiation protection.

1997–2003 — Deputy Head, Centre of the Environmental and Radiation Protection, Research Institute for Nature Protection, Ministry of Natural Resources of the RF.

2012–2014 — Head of the Department for Congresses and International Cooperation, State Unitary Enterprise of the City of Moscow «Moscow Centre for Implementation of Scientific and Technological Achievements «MOSKVA».

Since March 2015 — Head of Public Events Department, Institute for Energy and Finance;

The most important conferences and exhibitions, organized by Elena Uspenskaya:

Show all Show less
Subscribe
You will receive notifications about the release of new materials on the site. We do not share email addresses with third parties and do not spam.
Ok
Thank you!
Your application is accepted.
Ok